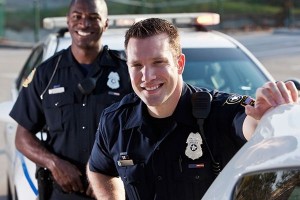 Television today has glamorized the careers of our hard-working police officers and detectives so that many individuals are seeking employment in that direction. They may not take police officer salary into consideration but it is important to ask how much do police officers make while thinking about law enforcement as a future career.

So what is the salary for police officers? An average salary for patrol police officers is about $57,000 annually which equates to about $26 per hour. However, the top 10% in this field make over $90,000 a year. Average entry level salary for a police officer is about $32,000. The Los Angeles Police Department advertises a starting salary of $57,420. Other top paying cities include New York and Chicago, likely because of danger involved with patrolling big cities.

Salaries for police officers vary by experience and often by skill.  Certain skills are important like leadership, verbal communication, and ability to write procedures or documentation will increase the salary for that officer. Another factor for an increase in salary is the amount of overtime an officer is willing to put in.

As part of the criminal justice system, these are responsibilities for police officers:

Police officers also have a huge community presence. They work on community outreach programs and education. Sometimes patrolling police officers issue citations for minor infractions such as parking violations. They have to file reports daily on their activities and any open cases. All police officers are issued a radio, a pair of handcuffs, and a service weapon which is usually a handgun. They are responsible for the appropriate use of all of their tools, especially their gun.

Some officers can get placed on special task forces or units like the K-9 unit or a unit that specializes in narcotics crimes. This is generally after an officer has worked for several years and is due for advancement. Uniformed police officers or patrolling officers generally have a specific area that they patrol with a partner. State police officers are also uniformed and they are best known as highway patrol officers.
Work Environment

The work environment isn’t always ideal for police officers. They often have to work weekends and night shifts. It is a physically demanding career. It can also be stressful and dangerous. Police officers have one of the highest rates of injuries or illness compared to other professions. Reasons for this include dealings with criminals, chases (high speed or on foot), and exposure to all kinds of diseases. Additionally, it can be a mentally demanding profession. When on duty, an officer must be alert and functioning regardless of the amount of sleep they got.

This job is usually full-time with plenty of opportunities for overtime. Because of seniority or tenure, many of the junior officers are required to work on weekends, nights, and holidays. The nature of this career requires that there always be a team available to respond to emergencies as needed. This is a male-dominated profession with men making up 90% of police officers nationwide.

How to Become a Police Officer

A high school diploma or equivalent is required for all applicants. Some precincts or departments additionally require a certificate or degree from a criminal justice program. Often, previous military work is a plus when considering applicants.

Applicants must be United States citizens, usually 21 years or older with a current U.S. driver’s license.  They undergo a complete physical measuring vision, hearing, strength and agility to confirm that they are physically in shape and capable of the work required. They are also subject to a strict background check to ensure that they have no previous convictions. Some also have lie detector and drug tests.

Many departments have their own police academy where recruits will receive classroom instruction and supervised work experience before they can be hired as a police officer. Applicants under 21 can participate in Cadet Programs where they will mostly do clerical work but can also go on “ride-alongs.”

Once hired, police officers can advance after a probationary period and after passing certain written exams. Promotions that are given are generally determined by who has been working for a longer period of time rather than who puts for the most effort. Essentially officers have to wait their turn for their name to come up for promotion. However, some skills might hurry along a decision like communication, empathy, good judgment, leadership, perceptiveness, physical stamina and strength.

It is predicted that police officer jobs will see a growth of 6% within the next ten years. While this is slower than the average career growth, many factors attribute to this. The United States will always need more officers especially as the population grows, but we are limited by the budget for law enforcement expenditures. Because we rely so heavily on government spending for the salaries of our law enforcement agencies, these predictions may not be accurate.

It is anticipated that within ten years, about 38,800 new jobs in law enforcement will open up. Although it may seem like a lot, the number of people going through police academies and criminal justice programs make it a very competitive job market.

It is recommended for applicants to have at least a Bachelor’s degree and some previous experience such as a Cadet Program for the best opportunities. It is also greatly beneficial to speak more than one language.

Correctional officers work in prisons and other correctional facilities. They oversee individuals who have been arrested and are awaiting trial or those who are serving time after being convicted of a crime. The requirement for this career is a high school diploma or equivalent and the average salary is $39,000.

Emergency Medical Technicians (EMTs) and Paramedics respond to emergency or 9-1-1 calls. They react quickly and deliver immediate medical attention. They are responsible for transporting patients from emergency situations to hospitals. They are required to have a post-secondary non-degree award for EMT training and the average salary is $31,000.