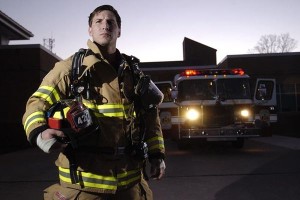 Many young children express interest in being firefighters at some point.  But what exactly does it take to be a firefighter?  They are responders for fires and other crises such as vehicular accidents and other medical emergencies.  Want to know how much firefighters make?  We will go over firefighter salary in this article.

What is the salary of a firefighter?  Currently, the annual average salary for firefighters is $48,750 and the monthly average salary is $4062.  The top 10% of individuals in the occupation are earning around $81,450 while the starting wage can be as low as $22,130.  The top paying states are New Jersey, New York, California, Washington and Connecticut.

Firefighters typically work long and varied hours.  They work 24 hour shifts on duty and then are off for a following 48-72 hours.  Some are even required to work 10 hours and then get 14 hours off.  When they are fighting fires they can work for extended periods without time off.  It depends a lot on the situation.  Additionally, most belong to a union which helps to protect their rights and wages.  The largest organization for firefighters is the International Association of Fire Fighters.  Overall, the salary can vary based on location and industry in which an individual works.

What are the responsibilities of a firefighter?  They are the personnel responsible for controlling fires and responding to other emergencies.  They typically carry out various duties including driving fire trucks/other emergency vehicles, putting out fires, finding and rescuing victims in burning buildings or other emergency situations, treating sick/injured people, preparing written reports on emergency incidents, clean and maintain equipment, conduct drills/physical fitness training, and provide public safety education on fire safety.  Their job is very active and requires a high level of physical fitness.

When they respond to an emergency they are responsible for connecting hoses to hydrants, operating pumps, climbing ladders, and using other tools to help clear debris.  Firefighters may be required to enter burning buildings or providing medical attention.  In fact, 2 out of 3 calls for firefighters are medical emergencies.  Their duties can change several times on the scene of an emergency depending on the situation.

While they are not on the scene of an emergency firefighters are on-call at the fire station inspecting equipment and running drills.  They also eat and sleep at the station during their on-call times.  Shifts typically last 24 hours.

Some are trained in special areas such as forest firefighters or those that control, prevent, and clean up hazardous materials like oil spills and other chemical accidents.

Almost all firefighters work for local governments.  The remainder worked for federal or state governments, airports, chemical plants, or other industrial sites.  Firefighters’ home bases are the firehouses where they store and maintain their equipment.  They also sleep and eat there while on duty.  They tend to work long and sometimes odd hours.  Most have 24 hour shifts and then are off duty for 48-72 hours.  Other stations employ the 10/14 schedule where firefighters are on duty for 10 hours and off duty for 14 hours.

Because firefighting is a very physical and dangerous job they have one of the highest rates of injuries and illnesses.  They encounter dangerous situations such as collapsing buildings, walls, traffic accidents, and exposure to flames and smoke.  Due to the highly hazardous nature of the job firefighters are required to wear protective gear head to toe that is very heavy and hot.

How to become a Firefighter

Requirements to become a firefighter can vary by jurisdiction.  But almost nearly all firefighters need at least a high school diploma or GED.  If they want to ear certain certifications such as EMT they may need postsecondary education.  Most beginning firefighters are required to pass a physical and written test as well as several interviews.  They must also be at least 18 years old, have a valid driver’s license, and pass a medical exam/drug screening.  Once they are hired they may be subject to random drug tests.

Once firefighters are hired they undergo extensive training.  They often train at fire academies run by a fire department of the state.  Topics that are typically included in training are fire-prevention, local building codes, and emergency medical procedures.  Some departments offer 4 year apprenticeship programs that combine classroom learning with on the job training.

Depending on the state or jurisdiction some firefighters might have to be certified as EMT- Basic Level or EMT- Paramedic.  These certifications might be required for hiring, but they can also be earned while on the job.

There are various promotions for firefighters that include engineer, lieutenant, captain, battalion chief, assistant chief, deputy chief, and chief.  For promotions beyond battalion chief most departments require bachelor’s degrees usually in the fire field.  Some can also become fire inspectors after gaining experience.  The National Fire Academy offers an Executive Fire Officer certification.  In order to be eligible for the program candidates must have a bachelor’s degree.  It can cost $6,000-$11,000 to become a firefighter depending on if it is an associate’s degree or a certification.

By 2022 employment opportunities for firefighters is projected to grow only 7% which is much slower than the average for all other occupations.  Due to an aging population there will be an increased demand for emergency responders.  About 2 out of 3 emergency calls are for medical rather than fire emergencies.

Jobs will also be created as volunteer firefighters are given paid positions in areas where they need full-time workers.  In addition, urban populations are expected to increase therefore also increasing the demand for full-time firefighters.

The profession is expected to face strong competition as many people are interested in the job because of the challenges if poses, opportunities for public service, and relatively low formal education requirements.  Therefore, departments may receive hundreds of applicants for a single position.  Those that are physically fit with high test scores, some post secondary education and EMT training will probably have the best job prospects.

EMTs and paramedics care for the sick/ injured in emergency situations.  They respond to emergency calls and perform medical services while sometimes transporting patients to the hospital.  They usually work full-time and require post secondary schooling.  All states require them to be licensed, but the requirements may vary by state.  Employment is expected to grow by 23% by 2022.  Average annual pay is $31,020.

Fire inspectors/investigators examine buildings to ensure that fire codes are followed.  Investigators also determine where fires originated or the causes of explosions.  Most have a high school diploma and previous work experience in a fire or police department.  Employment is expected to grow by 6% by 2022.  Average annual pay is $53,990.