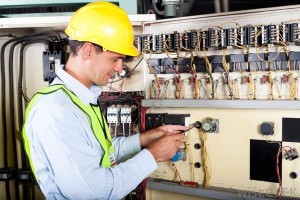 It’s easy to take electricity for granted. It’s been integrated into all aspects of our lives, and it’s hard to imagine life without it. While a power cut can be fun for a few hours, for most people the novelty is quick to wear off and are soon calling their local electrician. These highly skilled tradesmen work with all things electrical; appliances, wiring and infrastructure. Ever wondered how much an electrician makes? You’ve come to the right place. We’re going to cover key components of the profession; the average salary of an electrician, key responsibilities, work environments and potential career paths.

A number of factors determine annual income. The most influential is job experience. Electricians start their careers as an “apprentice” where they learn the skills of the trade. Apprentices typically earn 30-50% less than fully qualified professionals. After completing an apprenticeship, you become a “journey” electrician, and at this stage, earnings approach the profession’s average salary. Finally, after mastering the trade, you become a “Master”, which increases earnings by roughly 20% .

Electricians can be roughly split into three categories; installation, maintenance and production. All work with electricity, but have different responsibilities.

Installation electricians install electrical fixtures, infrastructure and appliances. Tasks range from installing wiring for residential homes, or putting up new floodlights in sports stadiums. Most of their work is carried out in homes or on building sites. Electrically wiring a building is completed before it’s completely constructed, as wiring fixtures are more easily accessed. Electricians must be able to read technical drawings and blueprints to ensure they wire buildings correctly.

Those involved in maintenance are responsible for diagnosing malfunctioning systems and testing a wide variety of electrical equipment. After locating the problem’s source, they use their problem solving skills and initiative to come up with a solution, and fix the issue at hand. They also conduct scheduled maintenance to minimize equipment failures.

Production electricians create electrical components and appliances. This could involve building circuit boards and testing equipment. They may solder circuit components together, so must be able to read and interpret complex circuit diagrams.

As electricity can be found almost everywhere, electricians work in a huge number of different environments. These include hospitals, nuclear power plants or military bases. Typically, they work in cramped conditions in order to access electrical wiring. Additionally, as most wiring is installed during a building’s construction, they commonly work in unheated, unfurnished sites.

Work hours vary depending on employer. Most typically work 40 hours per week, although it’s common to work overtime when a job needs finished. Self-employed electricians can create their own schedules, though commonly work longer than contracted professionals. Almost 10% of electricians are self-employed, whilst 60% are contracted. Those working in maintenance may be required to work through the night and on weekends if they are on call. A small but significant portion of their time is spent commuting to different work sites. Installation electricians, in particular, are constantly on the move.

The profession has a higher than average rate of work-related injuries. Although very few incidents are fatal, shocks, burns, falls and other minor injuries are common. As such, electricians spend most of their time wearing safety clothing such as hard hats and gloves.

How to become an Electrician

To become an electrician, one must complete an apprenticeship under a licensed professional.

While an apprentice, your time is divided between classroom study and on-the-job training. At school, you study courses such as electrical theory, blueprint reading, mathematics, and safety procedures. Learning is then applied in the “real world” under an experienced electrician’s supervision. During each year of apprenticeship, one is required to complete at least 144 hours of technical training and 2000 hours of on-the-job training.

Apprenticeship schemes are commonly sponsored by electrical contracting companies, who usually accept qualified individuals fresh from high school. Most apprenticeship programs require applicants to be a minimum of 18 years old, have a high school education with at least one year studying algebra, as well as a passing score on an aptitude test.

After completing an apprenticeship, one becomes a “journey” electrician, who are then able to perform their own duties subject to local licensing requirements under a “Master’s” direction.

As technology continues to play a larger role in society in general, there will always be demand for electricity, and thus always jobs for electricians. Over the next decade, the profession is expected to thrive, with BLS predicting a 20% growth in employment opportunities in the 2012-2022 projection period.

Job growth is attributed to multiple factors. With the government pursuing renewable energy initiatives, electricians are needed to install new infrastructure such as solar panels and wind turbines. They will also play a large role in connecting emerging energy technologies to existing power grids.

Employment prospects are very sensitive to the current success of construction industries. When construction is booming, more electricians are needed to install electrical wiring. When demand for construction dries up, so does demand for electricians. That said, professionals that have a wide knowledge of their field and can easily adapt to emerging technologies should always be in demand.

Electrical engineers design, implement and maintain a wide variety of electrical systems. They work with the flow of electricity, so work closely with energy technologies, such as hydro-electric dams and power plants. From an initial idea, they will develop a concept, and set it into action, collaborating with other professionals during the process. Becoming an engineer involves attaining a 4-year Bachelor’s degree in electrical engineering, which is offered by many accredited universities. The average salary for electrical engineers was $87,920 in 2012 (BLS).

Plumbers install and repair pipes which transport a variety of liquids and gases. Plumbers must be skilled at reading blueprints and schematics, in order to seal off certain valves to allow them to replace different sections of pipe. They also inspect pipe systems for damage and decay, as well as replacing appliances such as boilers, sinks and showers. Like an electrician, to become a plumber you must go through an apprenticeship scheme. According to BLS, plumbers made an average of $49,140 per year in 2012.