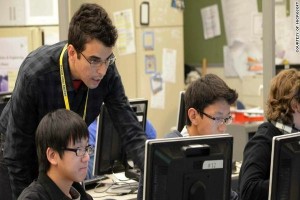 As computers are continuously implemented into aspects of our daily lives, the job prospects for computer scientists have never looked brighter. Whether it’s safeguarding sensitive data from cyber hackers, or developing state-of-the-art robotics, computer scientists work on a huge spectrum of different projects, making computer science an exciting, dynamic career. Ever wondered how much a computer scientist make? Look no further, as we discuss their average salary, key responsibilities, work environment and more.

A number of factors affect potential earnings. Firstly, salary increases with job experience. Entry level positions have salaries of around [Starting Salaries], though rookies can expect to earn 30% more after just 5 years in the profession (PayScale). Income is also influenced by employment location; the 5 highest paying states for computer science are Oregon, New Hampshire, Minnesota, California and New Jersey. Wages also tend to increase with specialization.

Computer scientists invent and design new approaches to computing technology. Using their knowledge of computing theory, they explore and address various computer problems by developing computer algorithms. They may also come up with innovative ways of using existing technology.

To give you a bit of background, an algorithm is a set of instructions that a computer will obey. Some tasks, such as complex physics or mathematical problems, are challenging even for computers. It’s the job of the scientists to create algorithms that allow computers to solve problems in the shortest time possible, which increases both computing efficiency and speed. Developing new algorithms requires computer scientists to be creative and highly skilled at solving problems.

The profession’s applications is limited only by the number of industries in which computers are used. With technology virally expanding into new roles, the array of specialization options for computer scientists is huge. They include include data mining, which involves designing algorithms to detect and analyze patterns in huge data sets, robotics, or data encryption.

The vast majority of a computer scientist’s time is spent where you would expect: in front of a computer. Consequently, work settings can be anywhere with a laptop and a decent internet connection. Many are based in office-settings where they work alongside other technology-minded scientists, while others opt to work from home. They may need to travel to other locations; attending seminars or meeting with colleagues.

Work hours vary depending on employer. It’s common for computer scientists to choose their own work schedules, as managers are happy as long as deadlines are met. Typically, most will opt for 9-5 schedules, working 40 hours a week. Specialists are often required to work longer hours, as their services are in higher demand.

Computer science consistently ranks among the highest professions for job satisfaction. According to a survey carried out by PayScale, computer scientists said they were “extremely satisfied” with their career, giving it a 5/5 rating for job satisfaction. This is attributed to numerous factors, number one being that it’s a very creative career. Designing applets, creating new algorithms and solving problems with innovative solutions allow scientist’s imaginations to run rampant. Furthermore, the staggering diversity of computer science applications across the globe along with an ever-changing computing landscape means that there’s a huge number of possible career directions, making computer science a very flexible job.

How to become a Computer Scientist

Due to the technical demands of the profession, most entry-level positions require applicants to have a Ph.D. in computer science, or a related field such as computer engineering. To obtain a Ph.D., one must first obtain a Bachelor’s degree from a computing program.

The first 2 years of doctorate programs are spent taking a variety of computing courses. Students then choose a discipline to specialize, and they will then spend the final 2 years researching within their chosen field.

A Bachelor’s degree is sometime sufficient for those applying for positions within federal government.

Licensing is required for those wishing to become computer science teachers, but is uncommon in other disciplines. Certification is offered by various institutions to prove competency in particular areas.

According to the BLS, employment opportunities for computer scientists are projected to grow by 15% from 2012-2022. With the rapid pace of technological developments, the number of fields involving computing will only increase, driving job growth for those in the profession.

Certain fields within computer science are enjoying particularly high demand. The growing need for sophisticated cyber security measures to protect against hackers and cyber-attacks increases opportunities for data protection specialists. Also, businesses are using data collection more than ever before, especially for online advertising, meaning data mining experts will be employed to develop algorithms to organize masses of information.

Job prospects are very good, as a limited number of Ph.D. positions results in high demand for computer science graduates. In fact, many employers struggle to find enough skilled scientists to fill positions.

Hardware engineers design, test and develop computer hardware for a variety of commercial, medical, industrial or military applications. They typically create a piece of hardware that meets their client’s specifications. As such, they’ll go through the entire process of initial concept development to product design and ergonomics. Becoming a hardware engineer usually requires candidates to obtain a Bachelor’s degree in computer engineering from an accredited institution. Annual median pay in 2012 for hardware engineers was $100,920 (BLS)

Programmers write code to develop new software programs. They take ideas from software developers and engineers, and convert them into instructions which computers can understand. Programmers must be averse in a wide variety of computing languages, such as Java and C+. In 2012, the average pay for programmers was $74,280 (BLS).